Every week this spring, around 50,000 Ohio State students, staff, and faculty will spit in tubes at facilities on OSU’s main campus and five regional campuses, turn in their saliva samples, and then leave. About three hours later, they will get a new test result in their MyChart account that tells them whether they are positive or negative for SARS-CoV-2. Little do they know, the amount of work that went on to get those results in just three hours is enough to make anyone do a spit-take. 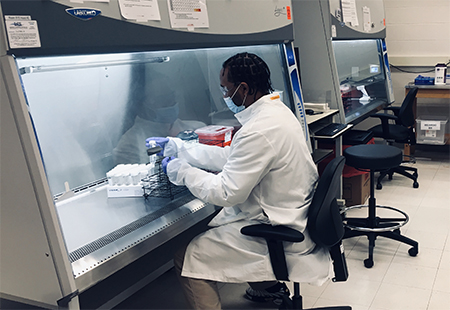 This past fall semester, in order to provide the most efficient and cost effective SARS-CoV-2 surveillance testing, Ohio State partnered with the on-site Applied Microbiology Services Laboratory (AMSL). AMSL quickly assembled a SARS-CoV-2 testing facility within an existing lab space in the Biological Sciences Building and medical center’s Electronic Medical Records System, IHIS. AMSL experts then hired, trained, and put to work a lab staff composed of student and full-time employees. By the end of the semester, AMSL had its SARS-CoV-2 testing running like clock-work and ready to process 25,000 samples per week. Then, OSU’s Comprehensive Monitoring Team, the contact tracing team, and epidemiologists determined the university needed to test 50,000 individuals per week for effective surveillance. Always up for a challenge, the AMSL team immediately began expansion plans.

Rather than expend resources doubling AMSL’s current SARS-CoV-2 facility, the team simply made the current operation a little larger and a lot more efficient. The process is fast-paced: each saliva sample has a barcode that allows AMSL staff to keep track of the person it belongs to throughout the testing regime. AMSL uses 21 qPCR machines to test the samples, and the staff runs each machine 5-6 times a day, 7 days a week. The machines export results for each sample to MyChart with virus data that indicate whether the sample is either positive, negative, or invalid (invalid samples are simply re-run). The results of the test are then pushed out to the patient, the contact tracing team, the Ohio Department of Health, and eventually up to the Centers for Disease Control and Prevention (CDC).

On top of expanding, AMSL is now banking positive SARS-CoV-2 samples. Beginning January 1, 2021, every SARS-CoV-2 saliva sample that returns a positive test result is stored in a freezer. Ultimately, after the arrival of a genetic sequencer in early February, AMSL plans to sequence the samples in order to identify genetic variants. “This is Phase II management of the pandemic,” said Dr. Seth Faith, Strategic Alliance Officer for the Infectious Diseases Institute and Technical Supervisor for AMSL. Identifying genetic variants will allow the team to quickly recognize particularly contagious strains and bump up the contact tracing priority of the infected individual. They could even identify the network where the strain is spreading.

To make all this possible, AMSL hired 45 new lab staff on top of the 27 members from the fall. Jeff Jahnes, Director of AMSL, says their ultimate goal is a team 80-strong. Since the hard work of scaling up and running a BSL-2 lab includes paperwork, AMSL also hopes to hire full-time administrative staff to help them continue delivering this essential service.

AMSL’s SARS-CoV-2 lab is saving the university money and saving lives with its same-day turnaround time for test results—but that’s not all. Many of the lab staff are graduate and undergraduate students who are gaining invaluable experience leading the pack in the race to end the pandemic. And this isn’t your average college lab class—“It’s like an industrial lab in an academic setting,” says Faith. “These students are getting such an amazing experience.” 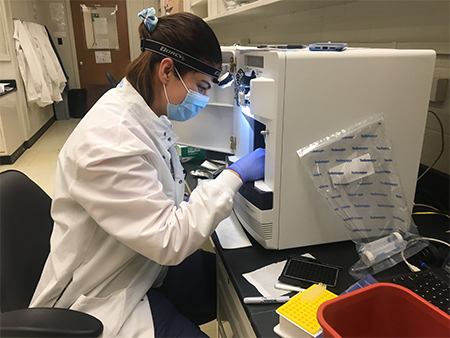 Read what AMSL’s student employees have to say about working in the SARS-CoV-2 lab:

“If I could tell the world one thing about what I do, I would say that I work with a team of dedicated lab members who came together to safely and efficiently process samples for the Buckeye community.”

“I worked at Jesse Owens North (where students spit in the tubes) before this. It was cool to start working in the lab and see the other half of the process. Before the AMSL opened up, we were shipping thousands of tubes overnight to New Jersey. Now, they get shipped across campus. Getting to be a part of the entire process, from specimen collection to testing, has been really interesting.”

“This lab has given me the opportunity to make a difference during a pandemic which is an experience I will never forget. Not only has it opened my mind to what goes on behind the scenes in medical research, but it has showed me how people of all different backgrounds can come together to help each other in a time of need.”

The Applied Microbiology Services Laboratory (AMSL), is a joint, interdisciplinary lab operated by the Department of Microbiology and the Infectious Diseases Institute

Ticking Away to Summer: May is Lyme Disease Awareness Month

Preventing emerging diseases. Protecting populations. Saving lives. A gift to the Infectious Diseases Institute can take us closer to a world free from the threat of infectious diseases. Be a part of the world-changing research taking place at Ohio State.

Choose an area to support
Give Now